(Banner made by Aentee)

Hey Bookworms! It’s time for an awesomely post on here! If you can’t tell, I joined an awesome event host by Aentee/ Read at Midnight! A bunch of us bloggers are getting together for Potterhead July (click the link to find your way to other awesome posts!) to talk about our favorite things about not only the books, but our favorite aspects of being in a fandom! If you can’t tell my favorite aspect of being in any fandom is the shipping, it leads to friendly debates about who we think should’ve ended up together after/ or even before the covers closed, or they spur our creativity in ways we never knew they could with things like fanart, tumblr posts, cannon, or fanfictions. For me Harry Potter was one of the first things to introduce me to shipping before it even had a name, and as I wrestled with what topic to do, this is the one that called me home, so let’s get to it! 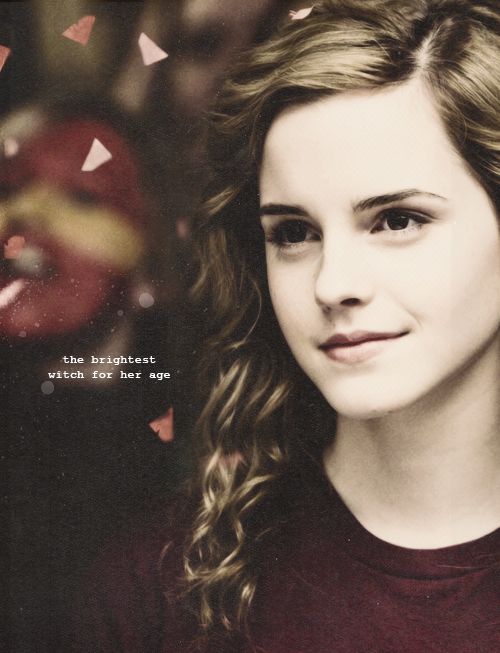 For me my ships tend to relate to the characters I can tend to relate to or feel most strongly towards and for me it was this witch above, Ms. Hermione Granger. For me although she was one in the beginning to follow the rules as the years progressed, she was one to stand true and hard to her friends and beliefs. She always had the thirst and hunger to learn more to dig deeper into the books to find more than one meaning, and for me as an English major (currently former) that is something I thrive on. In a way when they were younger she tended to be the one to lead her friends and be the most logical of the trio finding her brain and loyalty as a way to keep the trio together. To me she held the best qualities of all four houses: Bravery for Gryffindor, A Thirst for Wisdom like Ravenclaw, Loyal like a Hufflepuff, and just as Ambitious as any Slytherin when it came to gaining knowlege. She was after all one of the few to go back to Hogwarts after the battle. Now that I’ve finished my gush on this wonderful witch now I will tell you who I ship her with! 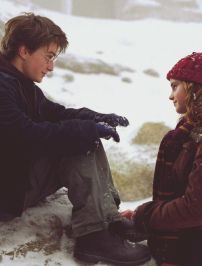 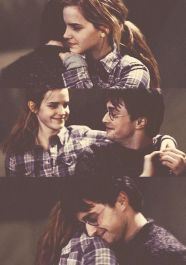 YES!!! I ship it soooooooooo hard and I have since about book 2 or 3. The thing is I believe wholeheartedly you should fall in love with and end up with your BEST friend, and for Hermione I think that was Harry and vice versa. She had a bond so deep with Harry and understood so many things as well as help better him more than Ron or Ginny did for either of them. Although she was friends with Ron for the most part there were hardly moments where I felt it didn’t go deeper than that, or even teaming up beyond helping Harry. It is the whole reason I could never get behind Ron and Hermione they didn’t have many one on one moments that seemed to found those moments. Hermione and Harry hugs always carried so much more emotion whether it was brightening, comforting, protecting or clinging to hold each other by their side. He always went above and beyond to get her out of her head, and she was always the most patient to wait for him to catch on or even hear out his own speculations.

Sadly, I’m one of the only few who ships these two, so they don’t have a ship name! Anyone want to help me come up with one? It wasn’t until I started college (four/five years ago, that I stumbled across a fanfiction that made me realized my F/F heart shipped this soooooooooooooooo HARD!!! Sadly I couldn’t find the fanfiction because it seems to have poofed off of fanfiction.net. The premise was how Hermione and Luna both decided to pursue more education going to a wizarding college after being some of the few that returned to Hogwarts. They realized how much they have not only in common, but have chemistry. Hermione resists it at first, but you can’t resist a cute blonde tugging at your heart. Both of these girls are very bright, but in very different ways! Hermione would be trapped in her books and Luna would teach her to learn in a more fun way. Lead her to wisdom and laughter. They would challenge and compete, but at the end of the day curl up on the couch with an issue of the quibbler or Hermione would take notes for Luna as they adventure off to find some crazy creature. Just thinking of their fluff and chemistry makes me swoon and smile!

So Bookworms, those are my two ships revolving around one great girl! Who are your ships? Do you share mine or can you not see them together? What is your favorite part or aspect of this fandom whether it’s a character or book gush? Did you participate in Potterhead July, if so link me your post down below! Comment your thoughts and let me know below and with that I will leave you a Harmony Video Below for your viewing pleasure! Happy Reading and Watching!